Biscuit joiner" and "Plate joiner" are different names for the same woodworking tool. The term "biscuit joiner" is more widely used in the United States while in the UK and Europe it is often referred to as a Plate joiner.

A biscuit joiner can sometimes also be called a biscuit jointer. Both a Biscuit joiner and a Plate joiner are the same tool made for same purpose just with different names.

Biscuit joiners also known as Plate joiners is one of the most essential tools. Every woodworker, whether professional or amateur, should have this tool to their collection.

Although biscuit or plate joiner have been built for one specific purpose, it performs the task so meticulously that they already have belonged to the category of the Must-Have-Tools for carpentry projects.

The key job of this tool is to cut slots into two work pieces to join them. The slots accommodate a special oval-shaped piece of wood, called biscuit, that helps align the two boards and strengthen the joint. It also can keep the joinery on the edge hidden or invisible.

If you're thinking of getting a biscuit or plate joiner, but have no idea where to start from, then this article will immensely help you get familiar with Biscuit joiner vs Plate joiner and influence you to keep one in your collection for your woodworking projects. 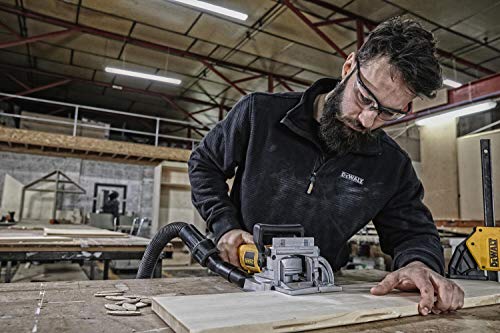 You could do box joints or dovetails, any number of things, but all these joinery you can’t hide. If you want the joinery totally be hidden and only see the wood, a really good option is to use Biscuit joiner. 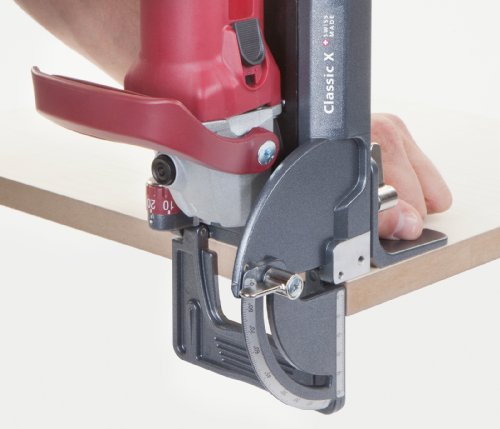 A biscuit joiner is a saw with a 4-inch circular blade which is used for cutting a crescent-shaped hole (called the mouth) in the opposite edges of two pieces of wood or wood composite panels.

Is the difference between the two a plate joiner the same as a biscuit joiner? So both joiners are discussed in detail here. And the safety features for using the plate have been noted.

The joiner operator draws a layout lines with a pencil across the two work surfaces following the two boards were lined up. The line on the biscuit joiner is matched up with the layout line where the cut is made.

A biscuit joiner is adjustable in depth of cut and position of the fence. The depth-of-cut adjustment allows to accommodate different sizes of biscuit while the fence alignment adjusts to different joint angles.

The smaller base can be rotated through 90 degrees and some models allow slots to be cut at angles other than 90° to the joining face, for example 45°, which significantly speeds up the assembly of things like cabinets.

Another big advantage of this tool is joining end grain to face grain. As end grain is a very weak part of the wood in terms of joinery, and putting a biscuit in their helps bump up a strength to some extent.

Bench top stands are available for most standard biscuit joiners. They allow a series of work pieces to be presented to the joiner, rather than single piece to be secured individually.

The plate joiner, also known as a biscuit joiner, is comparatively new to the home workshop. It is a kind of precious and smart sanction for the novice woodworker to work with. By using the football-shaped “biscuits” to reinforce a butt, miter, or edge joint, you can add considerable strength and durability.

Plate joiners are sold as distinct tools by many manufacturers. Conversion attachments are also sold for some routers, angle grinders, and drill presses that allow those tools to do plate joiner duty as well as their usual tasks.

Biscuit joiner vs Plate joiner - in the US they are more commonly referred to as a biscuit joiner while in the UK and Europe it is often termed as plate joiner.

Both are used to cut slots in stock wood using a spinning blade that is pushed outwards and into the wood. Both pieces of wood have the identical cut to have precise and compressed joint. 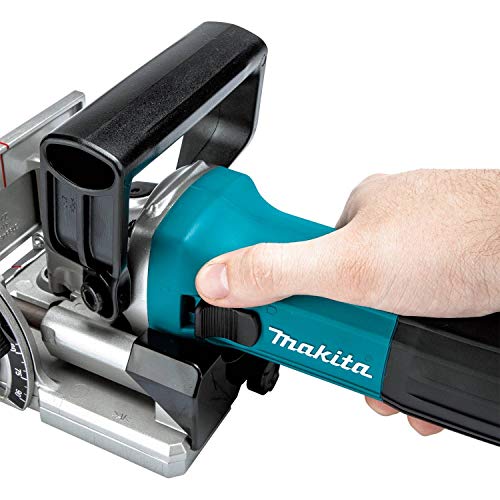 Biscuits are made from beech wood splinters that have been compressed into an lengthened oval shape. After making slots, the biscuit is coated with glue and inserted in the slots to get joined. The same procedure is followed by both joiners.

Both tools offer the cut at varying angles depending how versatile your cutter is.

Both tools allow to adjust the fence and cuts of varying depths.

Both tools offer the kind of joins that are made will normally be at 180 degrees or edge to edge as it is known. They are also used when joining at 90 degrees for making a small table or a drawer as an example.

The joints are significantly stronger, however they do take slightly longer to setup and make.

Before commencing your project, you must wear as appropriate from the set of safety equipment i.e goggles; ear plugs; musk, protective cloths  and boots in order to prevent injuries, respiratory infections and work place hazards;

Biscuit are made from beech wood splinters that have been compressed into an lengthened oval shape. This is highly dried and compressed wooden object or piece called biscuit. Biscuits are 0.148 inches thick but are available in three sizes of differing lengths and widths.

A glue-coated biscuit is inserted into the slot that has been cut into both pieces of wood. When a proper biscuit slot is cut into two pieces of wood for joining, the biscuit helps keep the boards positioned as well as create a room for necessary adjustments.

Another significant advantage of this tool is joining end grain to face grain. As end grain is a very weak part of the wood in terms of joinery, and putting a biscuit in there helps bump up a strength to some extent.

Edge-to-edge glue-ups are the most common type of joint produced with biscuits mainly used for tabletops. Biscuits are also used to reinforce miter joints, such as those used in picture framing, butt joints, in which two boards are connected end to end; and T-joints, in which boards are arranged in a "T" formation. Biscuit joinery is also used in drawer construction and to attach moldings and edge bands 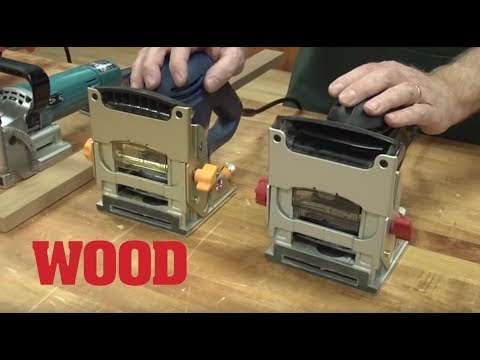 As discussed above, there is actually no basic difference between Biscuit joiner and Plate joiner. Just the name is differently used in USA and Europe. Both offers same service having a same kind of work features. It is an unique tool for joining two pieces of woods required for woodworking projects.

So, when query is raised with regard to Biscuit Joiner vs Plate joiner, it is actually referred to the same tool. I hope you have already realized it from this article.

There are variety of models including corded and cordless available in the market. You may get one for your project. I am sure, it will give you ever best experience while making precise and accurate slots in wood pieces for your project. If you have any further queries, we are there to provide you with information and support you as required.